Back in 1965, Intel co-founder Gordon Moore stated that the number of transistors on a silicon chip would continue to double every two years. His projection has been matched and even bettered over the decades, leaving untold numbers of dads giddy every time they walk into a Best Buy. The TV screens get thinner, the computers get lighter, the mobile devices shrink to the point of becoming choking hazards. An inverse relationship between progress and pricing adds to the glee, especially here in the holiday season.

But there are two things Moore’s Law didn’t predict.

One is the heaping pile of junk left in the wake of every advance in consumer electronics. Flat screens save all kinds of space in your living room, but unless there’s a CRT fairy out there somewhere those old tubes are going to take up a lot of landfill space instead. What to do with e-Waste has become a major concern among environmentalists, who already were scratching their heads about difficult disposables such as batteries, household paint, and other items of mass consumption. I learned a bit about it writing How Do I Get Rid Of This Stuff? for MSN.com. See below for some helpful links that weren’t included in the online feature.

Second, no one foresaw that consumers would have genuine affection for the gadgets, games, and gizmos of yester-tech. There is something a little strange about feeling nostalgic for a transistor, but it’s familiar territory for anyone who played Pong or Blip or Mattel’s handheld football game. If you’ve got a soft spot for old tech, or if you simply had no friends in the 1970s, you might enjoy this look back over Past Portables. 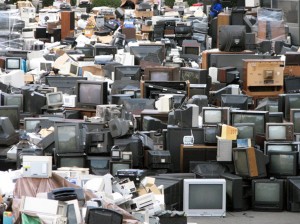