Let’s do some catching up over the next few entries — quick, before blogging is passé.

September has proven to be a big month for guitar nerds, at least this one.

•  Many thanks to my friends in the band 3rd Gear for having me share a bill with them on the first annual Playing For Change Day (Sep17), when performances around the world promoted peace and positive change through music. For just a few bucks you can sponsor a music program in Ghana or fix a guy’s djembe at PlayingForChange.org.

• The National Guitar Museum is now in Orlando, FL, where the traveling museum is closing in on its 100,000th guest. One of the first through the doors in Florida was nylon-string master Muriel Anderson, pictured below playing a diddleybo of mine — that’s the three-string Mickey Mouse job she’s holding — and actually taking the care to tune it. The did-bo was a gift from my hombres at TrueFire. Thanks to NGM Director HP Newquist for the image and for knighting me as curator.

• Those lucky enough to be in Montana for the Crown of the Continent Guitar Workshop & Festival were treated to a week of guitar slinging and fly fishing alongside greats like Steve Lukather, Lee Ritenour, Scott Tennant, Joe Bonamassa and David Wilcox. This is a trip for every guitarist to have on his/her bucket list. Hurricane Irene blew my plans this year but I’m in for 2012.

• Thanks to Dan Zaccari, a friend from Guitar Magazine days, for flagging me on this posting on DGM, headquarters of the Discipline Global Mobile record label. Fans of Robert Fripp get it. 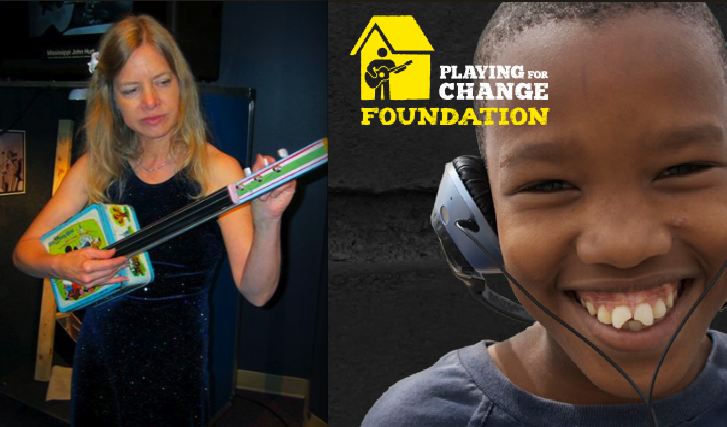