MSN Now is a new portal at the mighty Microsoft Network. The site, launched at midnight last Wednesday, aggregates top stories trending online. Any story that could, would, or should be circulating in social media can be ingested in one big gulp over at MSN Now.

To develop the content, MSN has hired media producers from around the globe, including myself, to suss the big stories and offer them up in short form. Again, trending topics rule the roost, so you’ll see everything from science to sports, from inspiration to desperation, from a-holes to black holes.
One story that briefly blipped in social media became the topic for an installment on The Daily Dose, another daily MSN project justifying my carpal tunnel syndrome. Check Big Brother Knows Your Sister, which jumps off at a London bus stop where the billboard scans you to figure out if you’re a man or a woman. 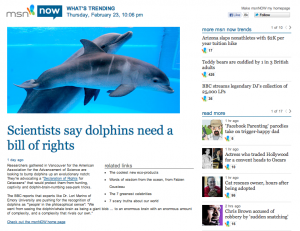