Back in 2003, I received a phone call from an editor at Backbeat Books asking if I’d be interested in writing the biography of Jim Marshall. The iconic designer of Marshall amplifiers was turning 80 years old and his stateside distributor, Korg, wanted to pay tribute with a book about not only his amps but his life. 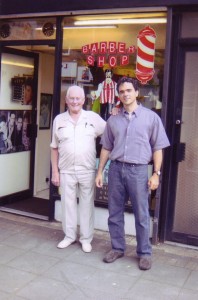 Within weeks I was on a plane bound for London with my wife and 6-month-old son. While my young family played in Hyde Park, I visited the Marshall factory in Bletchley and was chauffeured around West London with Jim to see his old haunts.  We visited the humble home where he gave drum lessons and saw the institution where he spent years in a full-body cast due to a childhood bone disease. We stopped at the Uxbridge Road location (now a barbershop) where Jim first blew the pants off of Pete Townshend with the amp he cobbled together from components found in the cutout bins at an army surplus store. As the days passed, Jim rolled out the red carpet for me and generously fielded my relentless stream of questions. I remember one afternoon in the limo, after a few pints at a pub near the house where he was born, asking Jim some complicated question about the mods on a Jeff Beck model. He was so quiet I wondered if I had stumped him. But he was fast asleep (remember, the guy was almost 80).

Back in the states, I spent time with Jim again when he dropped in on Les Paul, who was playing his regular Monday-night sets at the Iridium in New York City. Seeing the two of them together was a once-in-a-lifetime experience, and the room was full of slack-jawed guitar nuts like myself. At the end of the night, Jim grabbed the mic and crooned a sweet version of the Gershwin Brothers’ “’S Wonderful” to the delight of the crowd.

First thing this morning, I received a message from a BBC producer asking for an interview. I hadn’t yet read the news. Jim Marshall died last night at age 88.

I saw Jim only a few times after that night at the Iridium, when we had run into each other at industry trade shows. As the BBC producer asked for my recollections, I pulled a few prized memories of him from my shelves, including a signed book and a polite note of thanks. And I remembered a parting gift he’d left me with: a 2002 bottle of single-malt Scotch from Jim’s own collection, with a label commemorating 40 years of Marshall amplifiers. The bottle has gone unopened till now, but I’ll pop the cork tonight and hold up a glass to the man who gave a backbone to rock and roll’s back line.

Image: With Jim at 76 Uxbridge Road, site of the first Marshall shop