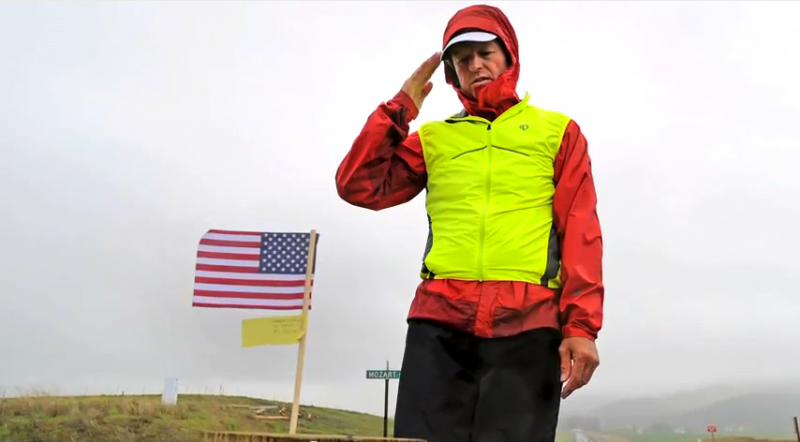 “Seeing America this way is very pure,” says Mike Ehredt. “I think back to the first people who came here, how they crossed our country on foot. I appreciate each mile and each person a little bit more.”

Mike is running as he talks — I can hear his feet hitting the ground as steadily as a metronome. Since August 23rd he’s been covering the distance of a marathon every single day, and will continue doing so until November 11th, Veteran’s Day. At each mile he stops and places a flag for a fallen soldier killed in the war in Afghanistan.

This morning finds him on the beautiful Natchez Trace Parkway just outside of Raymond, Mississippi. A specially designed app on his phone indicates he is 1,691 miles into his 2,100 mile run — a path that bisects the country from International Falls, Minnesota, to Galveston, Texas.

In preparation for Project America Run, the soldiers’ names were written out on 1,500 feet of yellow ribbon in the chronological order of when they died. With his phone, Mike assigns a GPS location for each and every flag so that a soldier’s family can see online where it’s located. When his run is complete, a wall of flags will wave from the shores of the Rainy River separating the U.S. and Canada to the Gulf of Mexico.

It’s the second time Mike has run to honor and remember American soldiers. In 2010 he ran from the coast of Oregon to the coast of Maine — from sea to shining sea — as a personal tribute. No political agenda, no protest, just a gesture of thanks and appreciation from a fellow service member. Mike explains that he served in Army from 1979 to 1983. “It just took me a long time to figure out that my service wasn’t quite finished,” he says.

Thanks to social media and a geo-locator on the PAR site, Mike sometimes encounters people waiting along the way to say thanks or run a few miles alongside him. Occasionally he speaks at schools. “At the end of each talk I tell the kids, ‘Look, I’m nothing special. I’m a 51-year-old grandpa. If a grandpa can go across the country and do this, and be thankful for what somebody else has done for him, what can you do in your life?”

Just as I ask who the next soldier is to be remembered, Mike’s footsteps are slowing to a stop. He’s placing flag number 1692 for an Army Private First Class. The soldier’s name is Cody Baker. He was 19 years old, from Holton, Kansas.

“I’m going to place the flag in the ground now,” Mike says. “I’ll salute him. Keep your hand over your heart.”

Mike places the flag and salutes Pfc. Baker. And then he runs on. 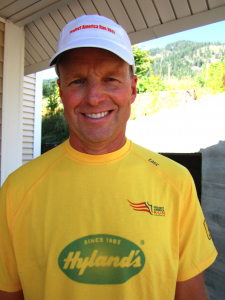